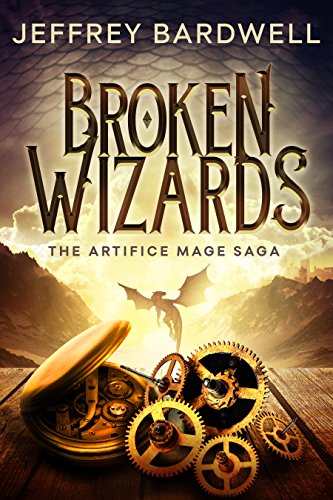 The wizard purge is in full swing. Sorcery is illegal in the modern, steam-powered Iron Empire. The Magistrate’s Black Guards hunt the uncivilized mages using mechanized armor and mysterious, clockwork weapons. The guards deliver their prisoners to the Butcher, Captain Vice. All wizards are tortured and executed as traitors to the state . . . with one exception.

That exception is Devin, an outbreak mage, and ex-artificer, a prince of machinery. The Magistrate exiles the youth over Vice’s protests to the wild kingdom of wizards and dragons. Devin only knows gears and springs, but his savage magic offers salvation if he can tame it. The exile must learn to harness his dangerous, new powers before the Butcher tracks him down to finish the job.

Follow Devin’s quest in Book One* of The Artifice Mage Saga. Join the fantasy steampunk brawl of metal vs. magic where sorcery is bloody, science is greasy, and nobody’s hands are clean.

When I first began this book, there were so many run-on sentences, I had a hard time reading the first few chapters. However, I happened to notice on Amazon, that author Jeff Bardwell uploaded a newer version than the one I originally had. So, I downloaded that version, and once I began to reread the first few pages, I could tell a major difference in writing.

I have to say that the story line itself held promise, but seemed to drag. The main character, Devin, is exiled in the beginning and he soon realizes that he’s a mage. He goes on a quest in search of someone who can teach him how to control his magic. There wasn’t a lot of action as I had hoped. Most of the storytelling seemed to be based on the characters’ thoughts which put me off. The paragraphs were also so lengthy. I found myself rereading several times to grasp what was happening, which took me longer than normal to finish.

I loved the imagery, though. When reading a fantasy story, I need to be able to picture the background. The world was built beautifully and had great word choices. However, I wasn’t too crazy about the poetic in the dialogue. It was too flowery than it needed to be when the book appeared to be full of darkness and evil. I get that the purpose was to fit the early times the story was set in. However, it just didn’t work for me.

Jeffrey Bardwell definitely had a great idea of a story full of mages and sorcery. Despite the hard editing done (and yes, I definitely could see the wonderful changes he had made), I rate this a three star. I didn’t hate the book but I didn’t love it either. I believe breaking up a few of the longer paragraphs, cleaning up the characters’ speech and adding a few action scenes here and there would have made a world of difference. It was a good effort. With more time, I believe this author could bring out more four or five stars to his writings. He has a good imagination.