estranged brother, he plunges into unwanted memories of his childhood. Between the dark secret he shares with his brother and the desire to find justice for the murder of a good woman, DeLong realizes how hard it is to separate work and family.**

Sullivan slowly pushed to his feet with a frown. “Why don’t you go ahead and just say it. I’m still on that list of yours, aren’t I?”
“What list?”
Sullivan stepped closer to DeLong so they stood eye-to-eye. “Don’t beat around the bush, brother. You know what list. Bree and I were having problems. Even had a terrible argument the day she died. On top of it all, I tried to kill someone once before. Put all those factors together, that makes me the most viable suspect.” 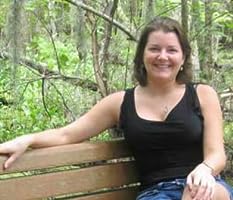 Equipped with a professional writing degree from Augusta State University, Angela Kay is a southern lady who spends her days and nights dreaming up new ways to solve dark murders of normal people.

Angela Kay was one of 23 across the United States to win a 2009 playwright contest for her one-act entitled “Digging Deeper.” Because of this, she was able to spend a week in Atlanta at the Horizon Theater Company.

She lives in Augusta, Georgia with her crazy calico, Maggie.