As usual, K.T. Munson does well at creating a brand new world that we can get lost in. She definitely has a knack…it goes without saying…after all, her blog is entitled “Creating Worlds with Words.” Her worlds she creates are characters in itself, which is great in fantasy since the only way we can hope to imagine what we’re reading is to delve into the author’s words. After reading several of K.T. Munson’s novels, she’s never failed at delivering.

I read the prequel and was interested in learning more about the heroine, Elisabeth. Unfortunately, she didn’t show up until several chapters in. Although I knew that the story was primarily about her, I wondered where she was. After I did read several chapters containing her, I found the adult version (in the prequel, she’s a child) of Elisabeth very likable. She’s more grown up, but the curiosity of the child is still evident.

It took halfway through reading before the story really picked up. The most I knew was that something big was going to go down…eventually.  I could only tell that Ki was destined to destroy Elisabeth with his Sin Eater because she was half evil. There were a lot of other plot points to focus on and to remember throughout the course of the novel. I knew eventually everything would come together, whether it would be in this book or the ones following. Knowing that it was going to be a trilogy, I wasn’t sure how it would end. Thankfully, it all was tied together in a nice little bow but had room to grow for the sequels.

The other supporting/main characters were created well and flowed off of each other. I’m looking forward to getting to know them in the coming sequels. While the first book of the series was slow in taking off, I’m hoping to get even more action. I would also like to see fewer plots because this book had so many primary characters and so much going on, it was just hard to pinpoint where they were being led. Of course, I believe that was the purpose. Either way, I can’t wait to find out where K.T. will lead us in the other two books in her new Gate trilogy. But do we really have to wait until 2019, as promised at the end of the book? 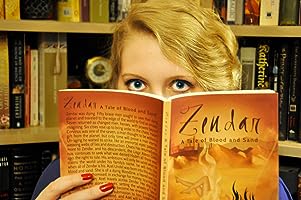 K.T. Munson is a freelance author. First published at 5 years old in the young writers conference, she has pursued writing ever since. She maintains a blog creatingworldswithwords.wordpress.com that is about writing and her novels. She was born and raised in the last frontier, the great state of Alaska.